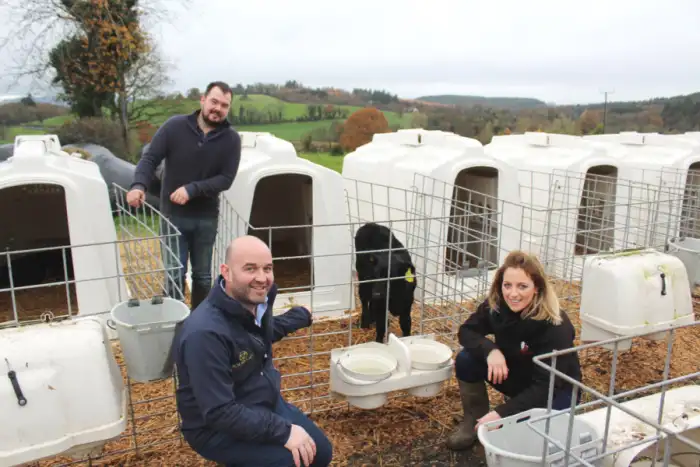 An investment in a hutch-based rearing system has transformed the calf management practises followed and the weaning targets achieved by Ballinamallard dairy farmer Dale Byers. Currently milking 150 Holstein cows with his wife Vicki, the Co Fermanagh man has traditionally reared all his own herd replacements.

“Up to three years ago, we reared all the calves in a shed and followed a standard feeding and management system,” he said. “But it was far from plain sailing. Problems such as scour and pneumonia kept building up, as did calf mortality rates.

“I was then made aware of the Agri Plastics’ range of calf hutches and decided to make the investment. It was one of the best decisions I ever made for the farm. “The hutches changed the mood music associated with calf rearing almost overnight. Instead of almost dreading the prospect of going out to the calf shed, it became an absolute joy to see the animals in the hutches.

“The health of the animals had improved dramatically almost overnight, as had their growth rates. Calf mortality levels fell back to almost zero.

The Byers’ herd is currently averaging 9230L at 4.17% butterfat and 3.51% protein. Cows, for the most part, calve between September and December.

“This is our third season of using the hutches,” Dale explained. “Each new born calf gets four litres of colostrum. It is then put into a single hutch. At about five weeks of age they are then grouped together. We normally wean the calves when they are around nine weeks’ old. The hutches have been located on a good airy site. They have been placed on a hardcore surface and bedded out with straw. Bedding can be easily added or changed, as required. Dale believes that the provision of an individual air space for each calf, particularly in those early weeks, is the key driver of the new management system.

He added: “Some people might think it’s a draw back to be feeding calves in the open air. However, the benefit of working with healthy young animals all the time more than makes up for this.”

Dale purchased the Agri Plastics’ hutches from Teemore Engineering. Manufactured in Canada, they are renowned internationally as the toughest of their kind on the market today. “Both group and single calf options are available,” confirmed Teemore’s Ray Foy, a recent visitor to the Hill farm. “What makes these hutches different is the quality of the plastic used in the manufacturing process. As a consequence, they have a 50% better impact strength, a longer life and being totally opaque, ensure high Ultra Violet protection at all times. In fact, the hutches come with a ten-year guarantee.”

In essence, the Agri-Plastics hutches guarantee the perfect environment in which to rear young calves.