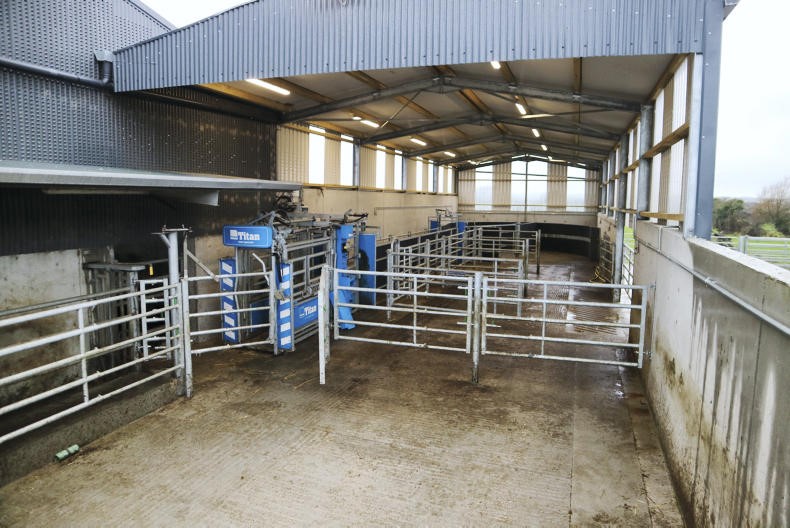 A state-of-the-art handling unit has been installed on the farm of Joe O’Reilly from Lurganboy Farm, Togher, Co Louth.

The farm calves down 130 suckler cows and brings more than 400 cattle through to beef every year.

An upgrade was needed to the handling facilities for a number of reasons, according to Joe.

“I’m going to be at cattle for a long time, so now is the time to invest and not when I’m 65. Safety, labour and time were the three main reasons for investing. It was an expensive unit but you have to ask yourself do you put a cost on these three aspects, and I do.

“We probably started off looking for a more basic setup but it kind of took a life of its own and we decided that we would cover it,” Joe said.

“If I was to go back I would have gone for a setup like this from the start. It’s a seriously safe system for handling large numbers of cattle quickly.”

The handling unit is made up of a loading ramp which feeds into a series of collection pens. From here, cattle will move into the circular forcing pen and up the race towards the crush box. Upon exiting the crush box, cattle can be drafted in three different directions if required.

“I did a lot of research into larger handling units but it was very hard to find similar units that have been installed in Ireland. I managed to see a few in the UK that I could take ideas from,” Joe explained.

There are three large holding pens before cattle reach the forcing pen. These have been designed to allow a quick exit in the case of an emergency, with roll-under gates and man-escape gates fitted in each pen. Roll-under gates are positioned high enough so that if a farmer was knocked he could easily roll out under any of the gates to safety.

The entire unit has been installed under a five-bay-long shed that is 24m long and 7.6m wide. The farm is located 400m from the sea, which fed into the decision to roof the unit. High-pressure wash-down points are located at regular intervals along the walls of the shed, which supply water at 70l/minute.

A 1.2m-deep slurry channel runs along the right-hand wall of the shed. The channel is approximately 11.5m long and feeds into another tank on the yard. The floor of the shed all falls towards the channel, while the concrete area around the loading area also feeds into this channel.

Cattle move from the holding pens and into the circular forcing pen that has a diameter of approximately 6.5m. This helps to push cattle towards the mouth of the crush. The unit was designed in a U shape as cattle will have a natural tendency to return to the direction they come from.

The forcing pen is lined with 9mm stock board for a few reasons, the main one being that cattle will naturally move towards the light so having the only light coming from the mouth of the race means they will more easily filter into the race. It also prevents them from being distracted from anything outside the forcing pen, whether that is the farmer or other stock.

Both gates can rotate 360° on a centre pillar, eliminating the need for the gates to be reversed. This allows the next pen of cattle to quickly enter the forcing pen, increasing the speed at which cattle can be handled. “The forcing pen works best when you have the amount of cattle in the forcing pen that can fit in the race at the one time,” Joe explained.

The forcing pen is fitted with notches which lock the gate as it goes along, preventing the gate from coming back and hitting the farmer. There is an access walkway around the back of the forcing pen also.

Cattle move from the forcing pen and into the race. The back gate of the race, like the crush box itself, can be controlled from anywhere throughout the shed by using a remote.
The race is 11.4m long and can hold approximately eight cows.

One side of the race is fitted with stockboard while the other is raised to allow increased access to cattle where less labour-intensive tasks such as applying pour-on or clipping the backs of cattle can be carried out. This access passageway is 0.9m wide.

“We have even stopped using the headgate to restrain cattle when we are injecting them as we have found that gently squeezing them makes them quiet enough to handle,” Joe explained.

“We went for the hydraulic option as opposed to the pneumatic (air) system as I didn’t like the hissing of the other system as it could startle cattle.”

This version of the Titan also comes with the vet access box, which Joe finds particularly useful when it comes to scanning cows.

Once cattle exit the crush, they can be drafted one of three ways: into the shed, through the old crush where a footbath could be set up, or to a holding pen with a loading ramp.

The total cost of the system came to approximately €65,000 including VAT.

“We are trying to have best practice on the farm,” Joe emphasised. “I want to be one of the top farms in the country.

“I am 100% happy with how it turned out and it makes a massive difference handling cattle.”

The plans for the unit and all the penning was supplied and fitted by Teemore Engineering.

Harry Byrne supplied and erected the shed while the concrete work was carried out by Brian McCabe.

“There was never an option but to galvanise the shed with how close we are to the sea,” Joe explained. “A shed with cattle is a corrosive environment to begin with but the sea air only compounds the issue.”