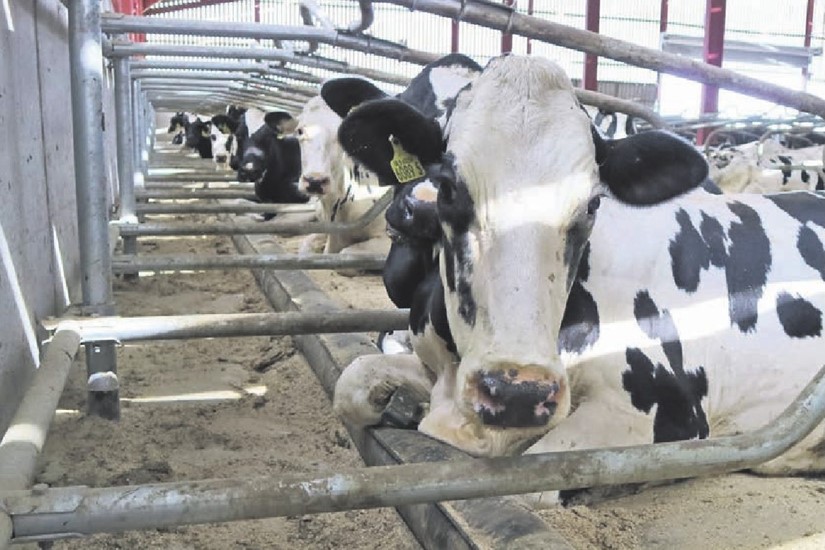 A 270-bed cubicle shed was recently built on the farm of Alastair Thompson from just outside Strabane, Co Tyrone. The shed was constructed with cow comfort in mind and to ensure adequate space throughout the shed.

"We wanted to try and be as cost-effective as we could with the project, so we went with solid passageways and a slatted tank running along one end of the shed," Alastair explains.

The tank installed will only hold around four weeks of slurry from the shed, but this was done to tie in with future development plans for the farm. "We are planning to install a lagoon on the farm where we will bring all the slurry to. We have found that it is taking too long to spread slurry during the summer the way that the farm is currently set up, as we are drawing it from the sheds and we are losing too much time at a busy period of the year," Alastair says.

"The plan is to have the lagoon located nearer the silage ground with the slurry drawn to it throughout the year by our own labour on the farm or by contractors."

There are also plans afoot for the farm to install an anaerobic digester on-site, which would need a fresh supply of slurry close to hand.

The farm currently has the capacity for 560 cows with the construction of the new shed. However, there have been big changes over the past year. Originally Alastair ran two separate farms, the home block was used to milk approximately 270 cows but a difficulty in sourcing labour meant that he had to amalgamate the two herds to the one site.

"Labour was becoming more and more difficult to source," Alastair admits. "Where we would have needed five men for milking across the two farms before, now we can cut this down to three. We are calving and milking cows all year round so it means that we can keep the staff for the entire year."

Alastair continues: "We were spending too much time going between the two blocks, even though they were only a few miles apart. The plan now will be to have a grazing herd of around 250 or more cows while the high yielders will be kept housed."

The plan is that the old block and the sheds located there can still be used for dry cows throughout the year.

The target on the farm is to have a small Holstein cow that can produce an average of 9,000litres with 4.2% fat and 3.4% protein.

The shed is 13 bays long measuring approximately 63m long and 40m wide. There are three rows of cubicles on each side of the shed with a feeding passage running down the centre. Feeding can also take place along the end of the shed. This allows for approximately 85% of cows to feed at any one time. All head spaces are fitted with lockable head gates with these used for a multitude of management practices on the farm.

The shed stands at 5.8m at the eaves with ventilation a key consideration for Alastair. "The shed has to be able to accommodate cows on a warm day- cow comfort in the shed is paramount,"

Alastair outlines. "We went with cladding (spaced boarding) as we wanted as much air movement in the shed as possible. We have a lot of experience with vented sheeting and I think it is useless for air movement." Indeed, while it was a warm day when visiting the shed, air movement could be felt throughout. In somewhat of an unorthodox design in this country, the decision was taken not to install any scrapers in the shed. Instead a skid steer will be used to clean out the passageways twice a day.

"I am not a fan of scrapers, and a skid steer will give far less trouble," according to Alastair. "I have been on a lot of big dairy farms in the UK and you won’t  see many with scrapers."

One drawback of this shed could be the build-up of slurry in passageways and Alastair has admitted the scrapers could always be added in the future, if required. Another option could be to increase the number of times that passageways are scraped with the skid steer.

However, it would mean that cows would have to be locked to the front or back of the shed as they are currently scraped when cows are out of the shed for milking.

The shed was designed to allow for ease of movement of cows to the feed face and to cubicles. The back passageways of the shed are four metres wide while the passageway along the feed face is 4-9m wide.

All floors of the shed are grooved, which has had unexpected benefits, according to Alastair.

"We are having cows expressing heat right throughout the unit. In other sheds we would have cows only showing signs in certain areas of the shed and a lot of that is probably down to the grip." Another area that was looked at was comfort of cubicles. For this reason a water mattress was installed on the cubicles in combination with a water brisket board, known as an Aquaboard. Alastair has been most impressed with the water brisket boards as it provides more comfort for cows, which can lie with their heads or feet on it comfortably.

We went for a more expensive mat because we want the cubicles to be as comfortable as possible. There is a cubicle for every cow in the shed and cows seem to like them. We went for wider passageways to help cow movement. Often times this is where farmers will try and save on cost but an extra 3ft here or there for passageways is not a big expense in the overall cost," explains Alastair

The cubicles are 1.2m wide centre to centre and measure between 1.85m and 1.9m from the end of the bed to the water pillow. The top of the cranked neck rail to the cubicle bed is approximately 1.2m high. The single line of cubicles running along either wall of the shed are 2.75m long, while the double row of cubicles positioned head to head measure 4.9m in total.

Another simple extra that was added to the shed was a water metre for each side of the cubicle shed.

"People often talk about how much water cows drink but this way I can actually monitor it and pick up if there are any issues," Alastair explains. It will also allow him to install a mineral system in the future.

The total cost of the shed came to approximately £220,OOO excluding VAT. Teemore Engineering supplied all internal penning and fittings. They also supplied the Aquastar water mattresses and Aquaboard water brisket boards for the cubicles. The cost of going with this system for cubicle mattresses is approximately £180 (€200) per cubicle.